What is CAP Freedom of Conscience ?

The Coordination of the Associations and the People for Freedom of Conscience is an European NGO with United Nations Consultative Status, created two decades ago and dedicated to protect the Right of
Freedom of Religion and Belief.

Developing their expertise for 20 years, defending religious minorities against discrimination, they produce reports on religious freedom issues and organize events, conferences, meetings to unite minority religions to counter discrimination in Europe and worldwide.

FECRIS (Federation of Centres of Research and Info...

FECRIS (Federation of Centres of Research and Info...

FECRIS’s application for INGO status sent back by ...

ADFI, UNADFI and the FECRIS

Legal analysis of the report of Mr Fenech, Preside...

question about the FECRIS 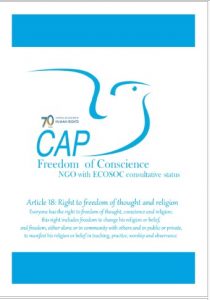 This website uses cookies to improve your experience while you navigate through the website. Out of these, the cookies that are categorized as necessary are stored on your browser as they are essential for the working of basic functionalities of the website. We also use third-party cookies that help us analyze and understand how you use this website. These cookies will be stored in your browser only with your consent. You also have the option to opt-out of these cookies. But opting out of some of these cookies may affect your browsing experience.
Nécessaire Toujours activé